The fifth wave of the pandemic cast a long shadow over subdivided flat dwellers, who struggled to cope in such tiny spaces, while fearing unemployment. The impact on their mental health cannot be ignored.

Caritas’ Youth and Community Service and Health in Action recently conducted a survey of those living in subdivided flats, and discovered that 40 per cent of respondents had symptoms of anxiety and depression.

Repeated Covid-19 outbreaks, income instability, overcrowded housing, fear of infection, and school closures undoubtedly put pressure on these households. Among the respondents, 43 per cent admitted their savings were not enough to cover daily expenses for a month. Furthermore, the survey found that while rents in Hong Kong largely decreased from last September to March, 12.2 per cent of respondents faced an average rent increase of nearly 8 per cent.

To mitigate the above situation, a multipronged approach is needed. Firstly, the relevant authorities should lower the eligibility for the current Cash Allowance Trial Scheme for those waiting for public housing. This should include shortening or removing the waiting time requirements. Such measures would offer immediate material relief.

As for mental health support, the authorities can set up a professional team comprising both social and medical workers, and arrange regular home visits and mental health examinations, to identify and provide treatment for emotional health issues. Arranging intervention at an early stage can also decrease the costs involved in treating much more developed or severe emotional symptoms.

We hope that all sectors of society will lend a helping hand to those in need during these difficult times. Together, we can stand stronger. 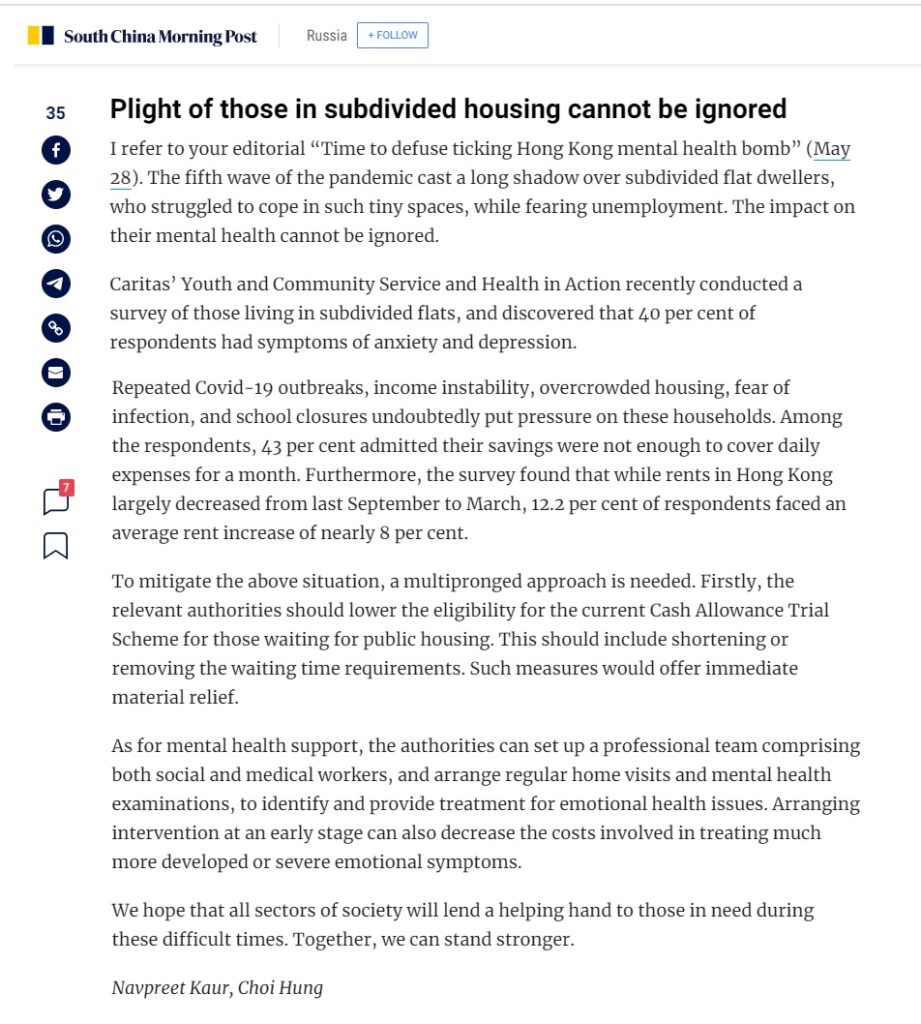 The article was originally published on SCMP Letters by Navpreet Kaur, participant of the D-Generation Community Innovator Scheme who took part in the Caritas’ Youth and Community Service’s project.

We use cookies on our website to give you the most relevant experience by remembering your preferences and repeat visits. By clicking “Accept”, you consent to the use of ALL the cookies.
Do not sell my personal information.
Cookie SettingsAccept
Manage consent

This website uses cookies to improve your experience while you navigate through the website. Out of these, the cookies that are categorized as necessary are stored on your browser as they are essential for the working of basic functionalities of the website. We also use third-party cookies that help us analyze and understand how you use this website. These cookies will be stored in your browser only with your consent. You also have the option to opt-out of these cookies. But opting out of some of these cookies may affect your browsing experience.
SAVE & ACCEPT